A LOO-K back at a busy old year! 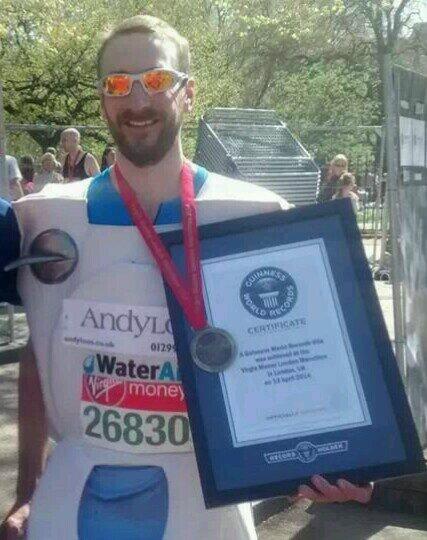 As the end of 2014 inches closer we take a loo-k back at some of our highlights.

The construction industry is in the midst of a revival after the credit crunch, and AndyLoos continues to be the pit stop of choice for many of the UK’s leading construction firms and jobbing builders alike.

Throughout the last twelve months our teams from across six depots have delivered 5000 of our dependable plastic portable loos to construction sites and carried out 66,559 service visits. And proving that builders are just softies at heart, our construction clients have made their way through 4 million metres of toilet roll!

In April, AndyLoos coasted into the record books – well actually it was Worcester athlete Marcus Mumford who we sponsored to run the London Marathon in a toilet costume. He ran a record breaking 2 hours, 57 minutes and 54 seconds and broke the Guinness World Record for the fastest marathon run dressed as a toilet!

Although the words eclectic and portable loos don’t normally appear in the same sentence our festival experiences this year have been just that! We provided exquisitely bespoke en-suites in the five-star surroundings of Camp Kerala near Glastonbury Festival and pitched up rows upon rows of our popular plastic portable units at Global Gathering, Green Man Festival, Beautiful Days, Lamer Tree and Somersault to name just a few.

For those with VIP passes we graced the hospitality area of many an event this year, including the exclusive Wilderness Festival. We even made a splash at the Royal Welsh Show – providing showers for the Royal Welsh Young Farmers!

AndyLoos also made an appearance at some of the UK’s biggest sporting events this year – BMW PGA Golf, British Grand Prix at Silverstone and at the highlight of the British horseracing event of the year, the Cheltenham Gold Cup. We were also invited to provide High Dependency Units for the launch party for the disabled athletes taking part in the Invictus Games.

The largest event contract this year was to provide the facilities for the participants and visitors to the Fairford International Air Tattoo held in July. Logistically this was a big challenge; scheduling the delivery of 40 articulated lorry loads of toilets, servicing all the units and removing a quarter of a million tonnes of waste.

Indeed the week of Fairford proved to be our busiest week of the year – our teams delivered and collected over 2500 toilets and travelled 38,000 miles – that’s the equivalent of one and a half times around the earth.

Always ready for a challenge, AndyLoos next one came when the great British summer threatened the success of the Dorset Great Steam. A seasonal downpour turned the site of the prestigious Fair into a mud bath making conditions extremely difficult for exhibitors and visitors. However, having been in the industry for 25 years we’re accustomed to dealing with anything the weather throws at us. Despite the ‘boggy’ conditions AndyLoos’ teams dug in and installed 600 standard chemical toilet units across the site. We also provided a dedicated team of 20 staff to ensure all the toilets were kept clean and that there was toilet-paper-a-plenty for customers for the duration of the event.

The House Festival presented us with a different type of challenge – access. The one-day, sell out event took place at Marble Hill House in Richmond, an area of London where vehicle access is extremely limited. We had just 24 hours to deliver and install 20 trailer units to cater for the thousands of visitors and headline acts for the event, including Dizzie Rascal, Jake Bugg and Paloma Faith.  The units were fully serviced throughout, and then, quick as a flash we swooped back in and removed them – as if we’d never been there at all!

November this year saw us celebrate our 25th Anniversary. The company began working out of a small unit in Tewkesbury with just 25 plastic portable toilets – now we employ 80 staff across six depots and are widely regarded as the UK’s leading providers of portable toilets!

One of the last events of the year was a seasonal trip to provide a resting stop for Santa, his elves and the thousands of excited children visiting Lapland UK. We installed a large number of luxury Alvac modular units neatly inside a custom-built log cabin in Santa’s village and a number of trailer units dotted around the site.

Who knows what challenges next year will bring and which exciting new places we’ll visit – but let’s hope it’s as eventful as this year!

Merry Christmas and a Happy and Prosperous New Year from everyone at AndyLoos!